Despite all of the new interface elements, the Finder is still the hub of activity on the Mac. For many people, the Finder is the Mac: it’s the thing that’s always there, even when you’re not running any apps. But while Apple isn’t necessarily trying to kill Finder, it is trying to get us to spend less time futzing around with files and folders.

One way it does so is with the new All My Files view in the Finder. It’s basically a Spotlight search for every file an end-user might interact with, including contacts, events, to-do items, images, PDFs, and so on. I’m actually surprised it took Apple this long to come up with it.

Another way the Finder makes files and folders less futzy is the Arrange By command, which now divides the window into sections, with files and folders sorted and separated accordingly. It’s on by default when you view All My Files, but it’s also available in any Finder window. You invoke it from the item arrangement drop-down menu in the Finder toolbar or by selecting View -> Arrange By. In either case, you can select to view files by kind, name, application, the date they were last opened, modified, added, or created, and more. As with so many other Lion features, if you don’t like this one you can tell the Finder to display files in the classic style by choosing View -> Arrange By -> None. But I found it a great convenience to organized All My Files by Date Modified; it gave me an at-a-glance look at all the files I’d used in in the past few days. Most of the time, whatever I was looking for was in that list.

The Finder's All My Files view, arranged by Last Opened Date.

All My Files doesn’t show you every file and folder on your system. That’s part of an apparently concerted effort by Apple to simplify the Mac experience for less advanced users. Other ways it’s doing so: The user Library folder is now hidden by default. You can still get to it (by choosing Go -> Go to Folder… or typing Command-Shift-G, then entering in ~/Library, for example, or by opting to make hidden files visible). And when you try to drag an app out of the Applications folder, the Finder will create an alias for it rather than actually move the app. (You can hold down the Command key while you drag to really make it move.) Neither of these changes is earth-shattering, but they indicate Apple’s new way of thinking: The company is trying to anticipate points of confusion among new Mac users—poking around in sensitive folders, moving apps inadvertently—and close them off.

Yet another change to the Finder is one that will probably benefit advanced users even more than novices: The search box in the Finder has been dramatically improved. When you type in a search string, you can specify exactly what you’re searching for from a drop-down menu: if you type logo, for example, you can choose to look specifically for files with logo in their names. You can also keep combine multiple search terms: do your logo search, then type image and select Kinds: Image from the drop-down, and you’re searching only for images with the word logo in the filename. You could do all this before with Spotlight wildcards, but it’s vastly easier to discover and use now. I wish the systemwide Spotlight menu behaved the same way, but it doesn't.

As with just about everything in Lion, there are other, smaller changes scattered throughout the Finder that longtime Mac users will likely notice. The sidebar has been redesigned to look more like the one in iTunes, with monochrome icons. Quick Look views have been redesigned and now feature a button to open a document in its default app. You can now select a bunch of files and use a New Folder With Selection command to file them all in one place.

Auto Save and Versions

Anyone who’s ever lost work because of a computer or app crash probably presses Command-S reflexively all day long, just to make sure everything is always saved. With Lion, Apple’s trying to make it so you never have to save a file again in order to protect your work. It’s also giving you the ability to reach back in time and retrieve previous versions of your documents.

Your favorite apps will need to be updated to take advantage of these two new features, Auto Save and Versions. But once they have been, they’ll all behave the same. Except in newly created files, the Save command will vanish from the File menu. Command-S will now invoke the Save a Version command. Save As has turned into Duplicate. And there’s a new Revert to Saved command that gives you access to all previous versions of your document—it’s like Time Machine for every file in every app that supports Versions.

To be honest, if someone didn’t tell you there was a new Auto Save feature in Lion, you probably wouldn’t notice. And that’s the point: Auto Save is intended to be completely invisible. Every chance it gets, the system will automatically save your file as you’re working on it. What’s on your screen is what’s on your disk. It’s no longer incumbent on you to remember to save your files. If you want to hit Command-S, your app will specifically stop and save the file at that point, but that step is entirely optional. And if you make a bunch of changes to a document and then try close the window or quit the app… nothing happens. Apps no longer have to ask you the classic Don’t Save/Save/Cancel question, because the document is automatically saved. Everything just works. It’s a huge boost for productivity and sanity, and—most important—eliminates that horrible moment when you click Don’t Save when you meant to click Save and lose all of your recent work.

But what if you choose to use the Save command tactically, only saving when you’re absolutely sure that you’re comfortable with the changes you’ve made to a document and don’t want to go back to your previous save? That’s where Versions comes in.

Versions is a bit like Time Machine: It’s an attempt by Apple to take geeky technology that’s been around for ages (in this case, the version-control systems used by programmers) and bring it to regular computer users. In fact, you can think of Versions as a sort of Time Machine for individual documents. When an app Auto Saves (or you give in to muscle memory and press Command-S), the system notes what’s been changed. A trail of past versions remains available at all times. 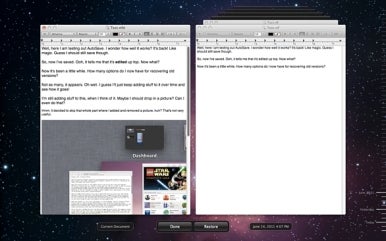 Comparing the current document (left) to a previous version.

If an item you deleted yesterday has suddenly become important today, you choose Revert to Saved from the File menu, and enter Versions’ spacey Time Machine-style interface. On the left side of the screen is the current version of your document; on the right are all previous versions. If you think everything you’ve done in the document recently was a colossal mistake, you can navigate back to a previous version and click Restore to entirely replace your current version. If you only want to grab a snippet out of that previous version, you can do that too, by navigating back to a previous version, selecting the snippet, and just copying it out and pasting it into your current document.

Apple’s done a great job simplifying what could have been an extremely complicated process. The key, I think, is offering people the ability to select items from the old versions and just copy and paste them into the current version. I’m far more likely to want to retrieve a single paragraph from an old file than the entire thing, and Versions lets me do that in a way that’s just as easy as copying from one window in my app and pasting it into a different window.

Since Lion is launching before the arrival of Apple’s iCloud service, it’s unclear how Auto Save and Versions will interact with iCloud. Since they appear to have been designed in parallel, I’m hoping that apps will be able to Auto Save to iCloud and retrieve versions from iCloud as well. If “the truth is in the cloud,” as Steve Jobs said, then the cloud is the right place for your versions to live, too. But we’ll have to wait until iCloud arrives this fall to see how all the pieces fit together.